A blog for raising funds for the ProDanza Ballet Academy in Havana, Cuba

Here are the other two students that performed for us on June 16th.  This is the first time that I have seen a male ballet dancer in pointe shoes.  A lot of passion in their performances! 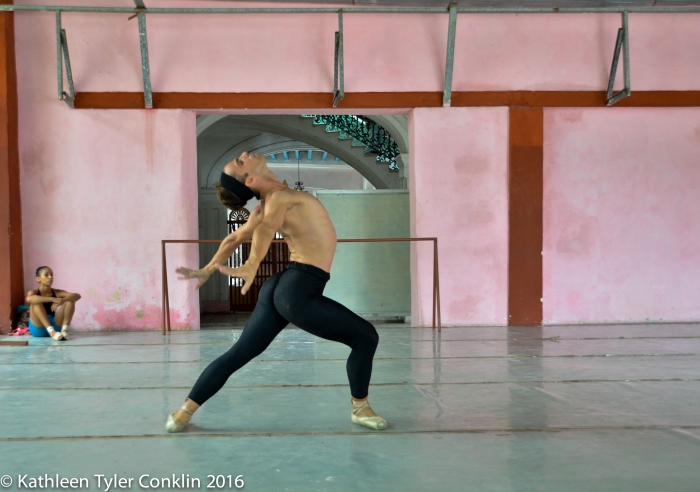 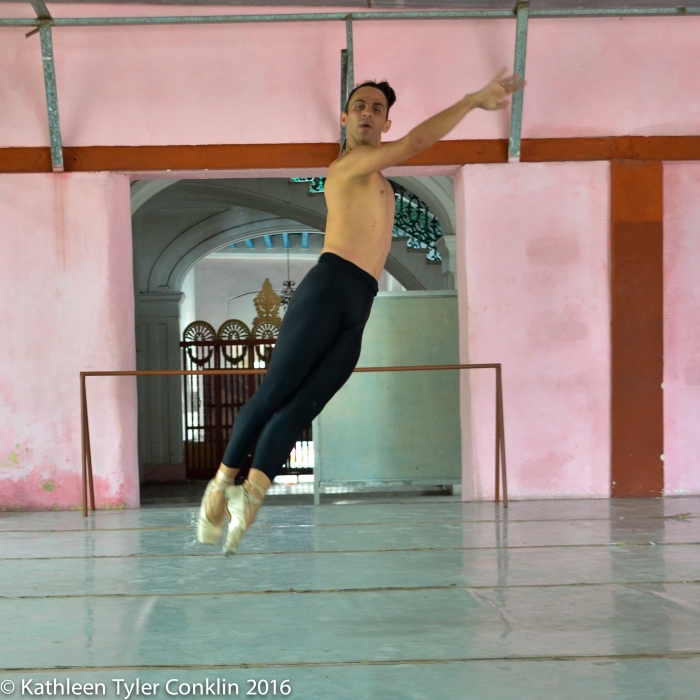 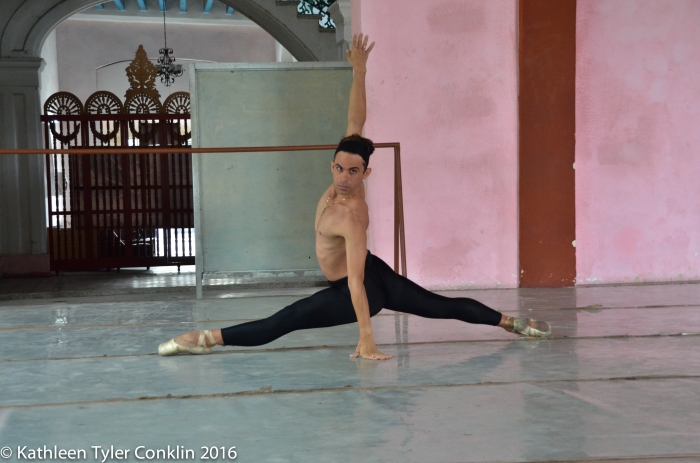 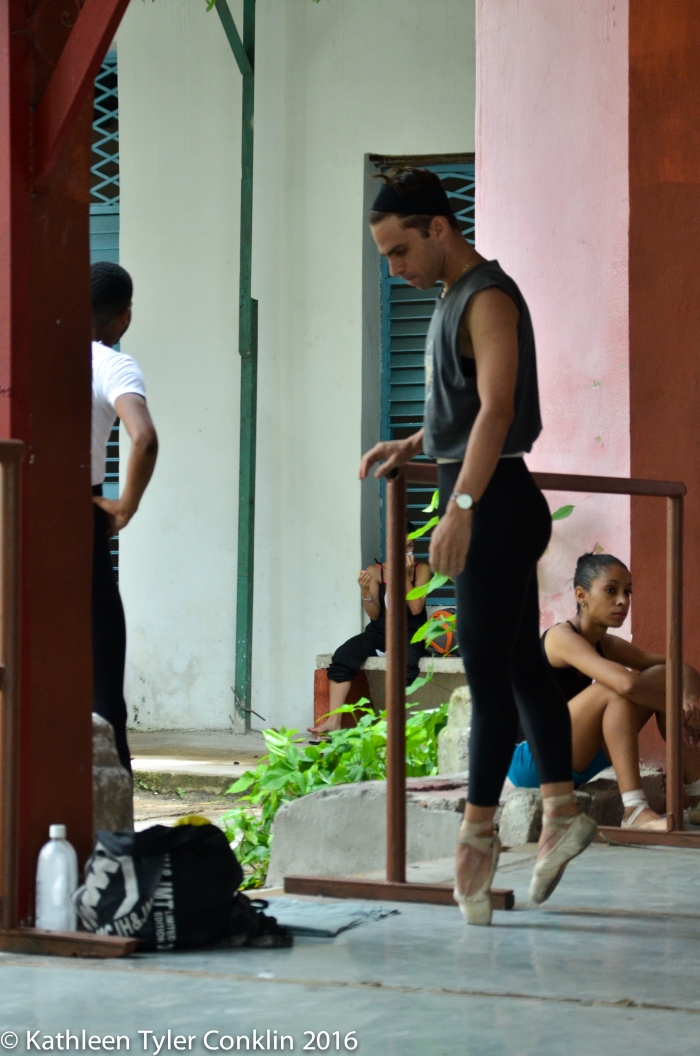 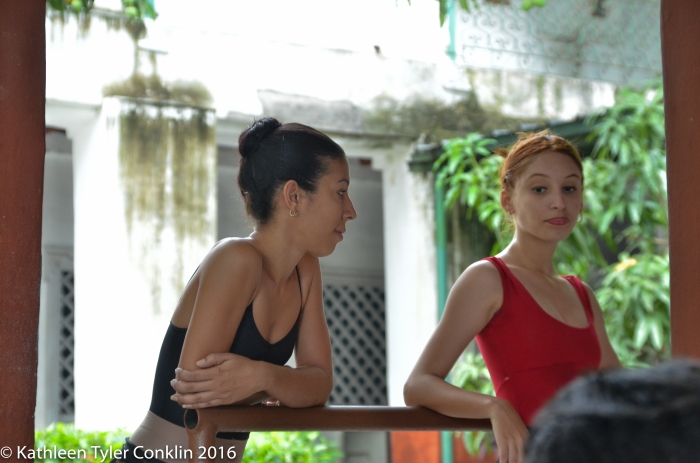 Enjoying the applause from our appreciative group

Some illustrations of ballet attire needs at ProDanza

Feel free to donate as little as you want! All will be appreciated! We can purchase a pair of ballet slippers for as little as $20! We have boots on the ground in Havana thanks to Cicely Sanchez of Altruvistas, who can facilitate the deliveries. 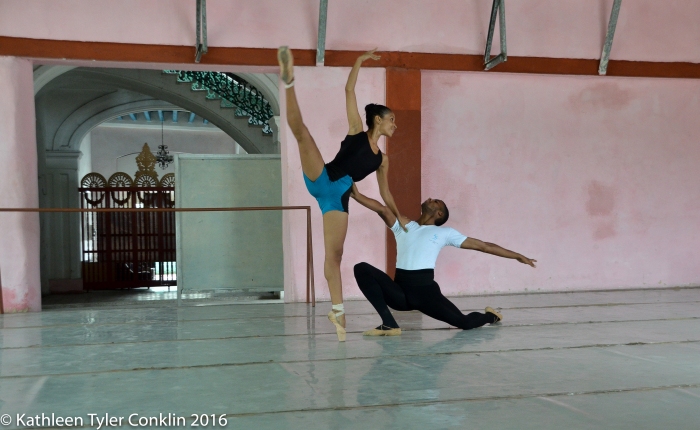 We watched her teaching a class and then we were treated to a nice rehearsal starring 4 students.  This blog post will feature photos of two of the four. 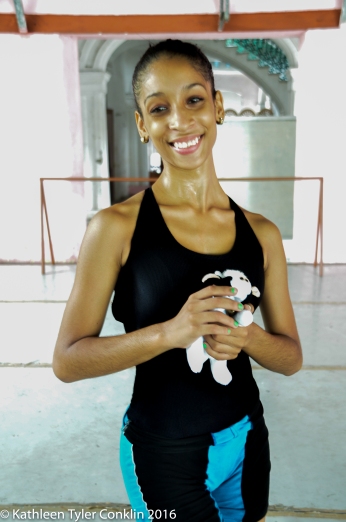 Together they were magic 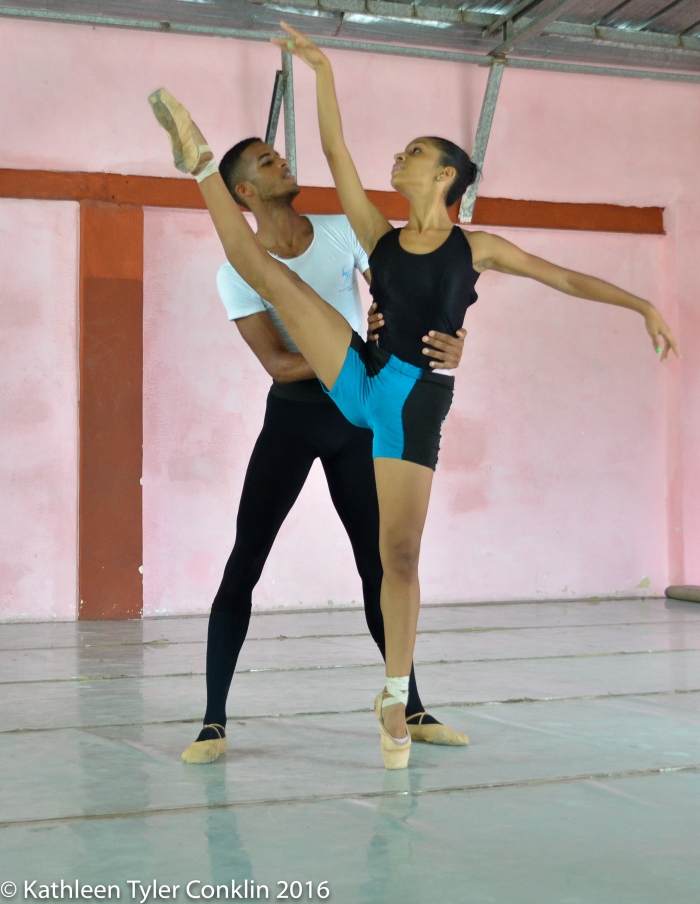 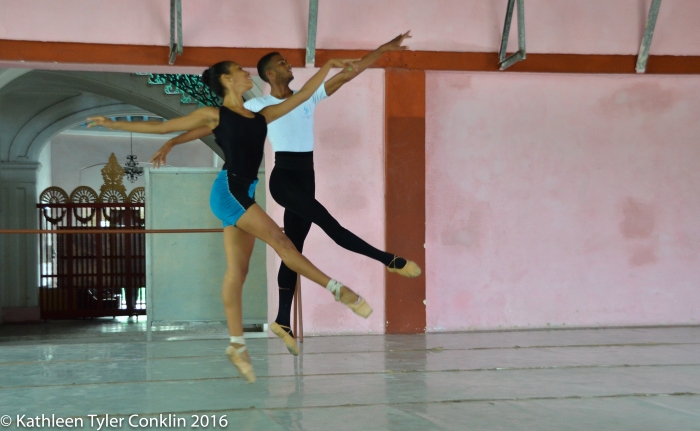 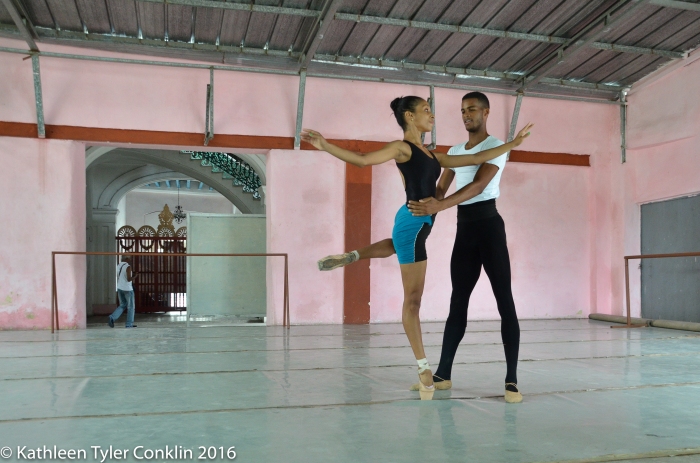 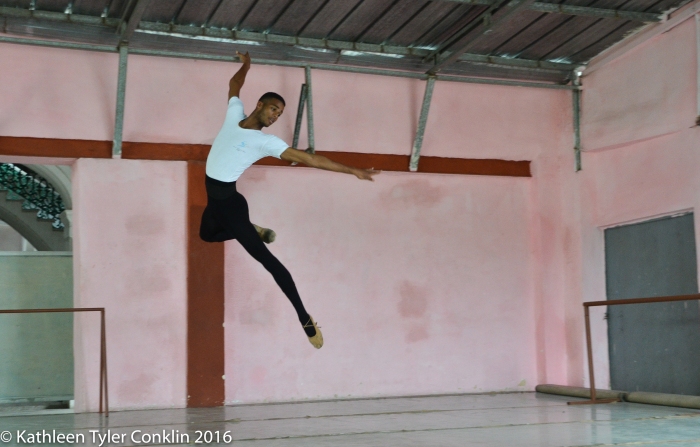 Such talent and energy in extreme heat! I left money there for them to buy two ceiling fans, which should be of some help!  More photos to follow in next blog post, building to one featuring our outdoor photo shoot on the 17th with the ballerinas in the tutus that Anne and Lynette Sullivan made and transported to Havana.

Feel free to donate as little as you want! All will be appreciated! We can purchase a pair of ballet slippers for as little as $20! We have boots on the ground in Havana thanks to Cicely Sanchez of Altruvistas, who can facilitate the deliveries.

Joyous trip to Miami airport this morning, but our plane was to take off for Havana at 2PM, and it hasn’t even arrived yet!

Four bags of ballet gear will be in the hold of the plane!

The travelers are all busy packing their bags for tomorrow’s flight to Miami. We will all meet up at the Crowne Plaza Miami Airport Hotel and then have dinner at the Catch of the Day, our traditional dinner spot the night before the flight to Havana.

The photo above was taken at the ProDanza Ballet Academy in November, 2015 during our first visit as Team ProDanza.

Going to Cuba differs from most trips in that everything has to be paid in cash, and there is no place to buy anything that one might inadvertently forgotten.  This causes a slight degree of anxiety, and makes one tend to overpack.  We are also taking some things for our trusty guides Cecily, Nestor and Alain.  Francesca has some costumes for little ones that were donated by Lynn Welters of the New School of Dance in DC.  I have a whole suitcase filled with ballet shoes, leotards, tights, etc.

Saying goodbye to my Chickpea, the dancing dog!

Feel free to donate as little as you want! All will be appreciated! We can purchase a pair of ballet slippers for as little as $20! Planning to go back with more get in the next year!

Anne and Ken  Sullivan are my next door neighbors, and not only are they smart and fun, but they have been my saviors many times!  Ken, when he is in the country, is my tech support, the guy who gets into the outdoor sump pump in the middle of a torrential downpour and a great bartender on his deck (pronounced like Dick with a New Zealand accent).

Anne is a gardener extraordinaire and makes the best jams and chutneys. It was Anne that I went to when I needed some ballet skirts to take to ProDanza for a photo shoot. Little did I know what a fantastic job she would do.

Last week Ken’s sister Lynette arrived from Auckland, New Zealand and dove right in to help with the ballet skirts!  I have never seen such enthusiasm – she was even talking about starting a cottage industry. Sounds great to me, but not so much to Anne.

They are such great sports that they came out to the yard for a few photographs, and Ken joined in to help toss the scarves, which as you will see, didn’t turn out exactly as we expected.  Ken, being an ingenious sort of fellow, came up with an idea involving a chair and a rake.

It seemed promising, but…

This is the best that we could do! Hopefully, things will be smoother in Havana!

Even though we leave on Tuesday, if more funds come in we will be able to purchase a ceiling fan or two while in Havana! No air conditioning at the Academy! 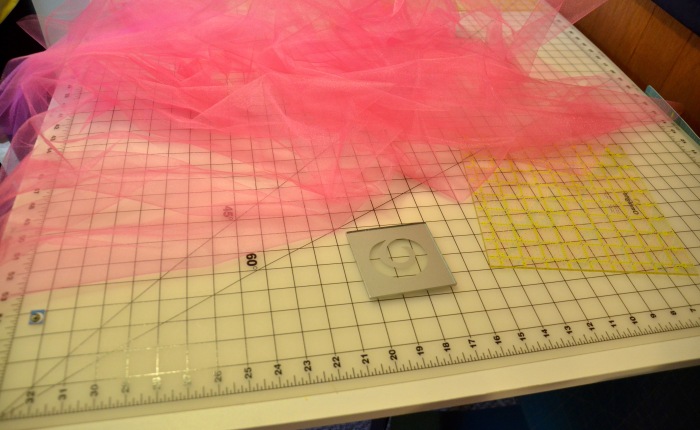 I just paid a quick visit to our busy sweat shop, where my two highly-paid (pre $15 minimum wage) workers, Anne and Lynette, were hard at work making ballet skirts for our photo shoot at ProDanza Ballet Academy in two weeks. They are sisters-in-law, good friends and they had me in stitches (really!) with their lively badinage. Obviously, they have known each other for many years and are very good at teasing each other in a gentle way. Two sizes are being made, both adjustable. The blue will be for the older girls, and the pink for the little ones.

We are also experimenting with long scarves for the kids to throw in the air during the photo session. The tulle seems a bit too light in weight. Lynette attached a small pair of scissors to the end of one, and then, for some reason it was too heavy, not to mention a little too dangerous. Back to the drawing board on that one! Suggestions for a material in the comments would be most appreciated!

The photo is of the ladies showing some of their handiwork! Lynette is on the left, and just arrived from New Zealand two days ago. Where is her jet lag? I saw no sign of it.  They are going to be fun traveling companions!

Anne and Lynette are praying that there will be some donations as a result of your seeing their incredible dedication to the project! PayPal is very secure!

Muchos Gracias to Team ProDanza friends Frances West, Kathryn Porterfield, Pam Wetherbee and Nancy Schilling. Thanks to their PayPal donations I was able to order 18 pairs of ballet slippers, 5 pairs of tights and 5 leotards to take with me on June 14th!

The photo at the top of the page is (l to r) Julia Mariño, Peg McCarty and Fran West at the party celebrating Peter Turnley‘s photo retrospective at the Museo de Bellas Artes in Havana last November. What a wonderful show and celebration of his life’s work!

There is still time to donate for us to get some gear before we leave on June 14th! Everything helps! We can purchase a pair of ballet slippers for as little as $20! Even $5 will purchase a ballet bun cover!

Nancy Moon, my great consultant on the Team ProDanza project, has written a wonderful blog post on our upcoming trip. Check it out at the link! 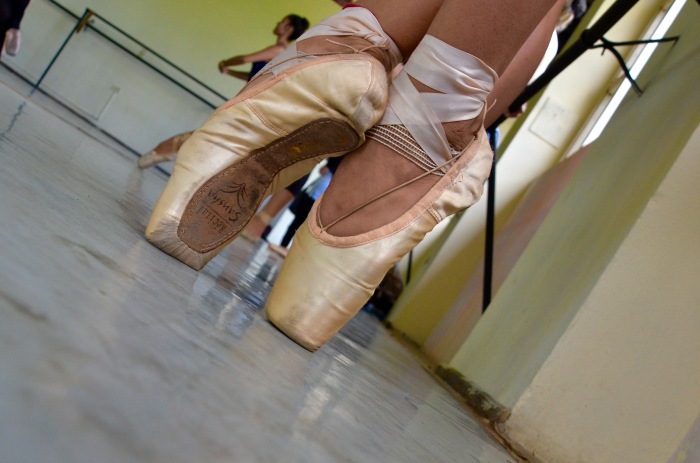 Feel free to donate as little as you want! All will be appreciated! We can purchase a pair of ballet slippers for as little as $20!